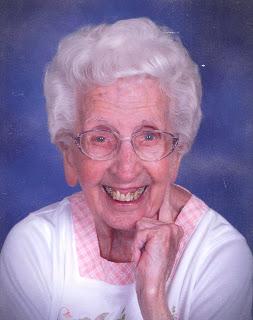 Please share a memory of Betty to include in a keepsake book for family and friends.
View Tribute Book
Silver Spring MD: Betty Vary died peacefully on Monday, July 13th, 2015, at the age of 99. She was predeceased by her husband of 56 years, Willette â€œBillâ€� Vary in 1997, her parents Thearl and Altheada Hiscock DeLano, and her two younger sisters, Altheada â€œTeadâ€� DeLano Weeks and Margaret â€œPegâ€� DeLano Glenn. She is survived by her daughter Joanne Vary Schwandes of Silver Spring MD and son Tom (Mary) Vary of Hilton NY; her 3 grandchildren â€“ Paula Posas (Walter â€œRobâ€�) Fitz-William, Shaytu and Hasan (Amy) Schwandes; her 3 great-grandchildren; nieces and nephews. Betty was born on 17 April 1916 in Rochester NY. Betty graduated from Brockport Normal School in 1936, and the College in 1948 (BA) and 1957 (MA); taught at Seneca and Iroquois Schools in West Irondequoit; then became the first female administrator in the Hilton Central School district and later the first principal of Northwood School, which she helped design. Betty was highly esteemed in the field of education and a 60-year member of the Alpha Alpha Chapter of Delta Kappa Gamma International (DKG). She also served as President of the Brockport Alumni Association (â€˜65-â€˜67), and was a member of the Hall of Heritage and Circle of Presidents. Betty and Bill married on 23 August 1941, were members of the BahÃ¡â€™Ã­ Faith since the early 70â€™s and retired to Florida in â€™71. In 2013, Betty and daughter Joanne moved to Maryland to be closer to family. Betty leaves behind a proud legacy of contribution, kindness, and encouragement of family members, students, staff, and colleagues to reach their potential and go after their dreams. Her loving reminder, â€œBe alert! Be safe! Be happy!â€� will echo long through the years. Family and friends are invited to attend Bettyâ€™s Gratitude Memorial Service at the Quest Elementary School, 225 West Ave., Hilton, New York 14468 on Saturday, August 8th at 10:30 AM. Prior private burial was at Parma Union Cemetery, Hilton, with Thomas E. Burger Funeral Home in charge of arrangements. In lieu of flowers, contributions in Bettyâ€™s memory may be made to a scholarship sponsored by the Alpha Alpha Chapter of Delta Kappa Gamma [checks payable to FLACE, fbo Alpha Alpha Awards, with memo " Betty D. Vary Award" and sent to Annie Tran, Treasurer, Alpha Alpha Chapter, 100 Battle Green Drive, Rochester NY 14624]; or to the faith community or charity of your choice.
Print
Online Memory & Photo Sharing Event
Online Event
About this Event