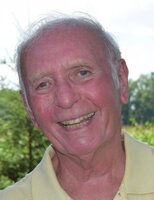 November 12, 2022, at age 89. Karl was predeceased by his parents, Luther and Minnie Lotzow Klafehn, and his siblings and their spouses Dean (Loraine) Klafehn, Marion (Norman) Rath, Luther (“Joe”) (Adeline) Klafehn and Helen (Luther) Unterborn. He is survived by his loving and devoted wife of 66 years, Barbara, children Rev. Richard (Dianne) Klafehn of Syracuse, Jeffrey Klafehn of Glen Mills, PA, Todd (Joan) Klafehn of Penfield, and Holly (Ronald) Drake, of Darien, CT, grandchildren Zachary and Joshua Klafehn, Erica and Ruslan Klafehn, and Christopher, Matthew, and Karson Drake, and many nieces and nephews.

Karl was born in Hamlin on June 22, 1933, growing up in the hamlet of Walker and marrying Barbara Hays in 1956 after finishing two years of service in the Army. He retired in 1991 from 30+ years at Eastman Kodak (silver recovery and chemical manufacturing departments), was a lifelong active member of St. John Lutheran Church (Hamlin) and was for many years active in local politics as a Hamlin town councilman (1964-1975). During his tenure as councilman Karl spearheaded the drive to construct the current highway department building. In 1974 he supported the creation of a Hamlin Town Hall at its current location, where signs he handcrafted still hang in the hallway indicating each room and town office. At St. John Lutheran Church, Karl served in numerous capacities over his lifetime and took a special interest in later years involved in ministries serving the needs of individual members. Karl also enjoyed serving for many years as president of the Klafehn Family Reunion, a role well-suited to his love for and interest in family.

Karl’s friendliness, playful sense of humor which he maintained until the end, and the interest in and efforts he made to see his children, grandchildren and others do well and have a good time made him much beloved among family and friends. The beautiful products of his woodworking skills and basement workshop adorn almost every room of the only house in which he and Barb ever lived and can also still be found in many places at St. John Lutheran Church, the Hamlin Town Hall, and in the homes of his children, grandchildren, and countless others throughout the area. His Easter egg hunts, meticulously prepared for months in advance, were legendary among his grandchildren, and his retirement was filled with many memorable trips with Barb to places both within and outside of the country, sightseeing as well as visiting family and friends. Karl’s Christian faith, laughter, and devotion to family will all be missed and cherished.

A Memorial Service will be held at St. John Lutheran Church, 1107 Lake Road West Fork, Hamlin, NY, on Monday, November 21 at 2 pm, followed by a reception. Burial will take place at Lakeside Cemetery in Hamlin.