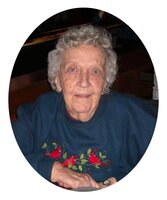 Ruth E. Diedrich passed away peacefully on Thursday, August 19, 2022, at the age of 96. She was predeceased by her husband, John (Jack) Diedrich (1993); her siblings Carl Rath, Margaret Wolf, and Henry Rath Jr.; and her son-in-law, Gary Voss. She is survived by her children, Gail Voss and Robin (Mary Ann) Diedrich; her grandchildren, Emily (Steve) Voss, Nathaniel Voss, Leslie Diedrich, Sara Diedrich and John Diedrich; and many nieces and nephews.

Ruth was born in her parents’ farmhouse in Hamlin, New York on November 24, 1925. She was so tiny (4 lbs 8 oz) that she could fit into a shoe box. As a young woman she worked in her brother’s butcher shop in Holley, NY. She later transferred those skills to Bauch’s IGA where she was employed for 25 years until her retirement in 1987. Ruth was a long-time member of St. John’s Lutheran Church in Hamlin and had fond memories of working on volunteer projects with her lifelong friends from the M&M’s group. Ruth and Jack loved to travel and visit their children and grandchildren.

Ruth moved to Montana in 2009 to be near her son. She lived at Mission Ridge where she enjoyed residing in a senior community, playing board games and card games nearly every night with her new friends. In 2015, Ruth moved to St. Louis to be close to her daughter. She lived her remaining years at Breeze Park, where she again loved playing games and working on crafts. Ruth always maintained a sense of humor, even in her later years when her health began to fail. When asked what she wanted for her 96th birthday, she answered, “A new body!”

We thank the Breeze Park Willow Way team and LSS Hospice for their care.

Ruth's Graveside Service will be held privately in Lakeside Cemetery in Hamlin.

In lieu of flowers, donations can be made in memory of Ruth to the St. John Lutheran Church Beautification Fund, 1107 Lake Rd. West Fork, Hamlin, NY 14464.