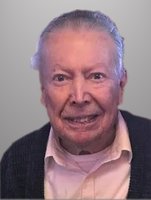 John was a US Veteran of both the Army and the Navy and worked at Eastman Kodak.

There will be a Military Graveside Service in the summer of 2021 at Parma Union Cemetery.

John was a kind and dignified gentleman with a wonderful smile. He loved all his family, and we will miss him dearly.

The family would like to express their speical thanks to Grandville Senior Living community for the care he received.

Those wishing may contribute to a charity of your choice in John's memory.