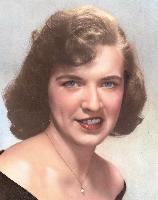 Hilton: 79, peacefully in her sleep on March 20, 2015. Leslie was born in Rochester to George & Irene Burandt on April 11, 1935. She graduated from Charlotte High School and shortly thereafter married Michael Richard Groves in 1954. Leslie was a homemaker and enjoyed the outdoors, reading and spending time with her family. She was a remarkable woman whom the good Lord so loved. He marked her passing with a total eclipse of the sun in the northern hemisphere. She was predeceased by her parents, George & Irene; brothers, George Jr. & John Burandt; sisters, Jeanne Nolan & Ruth Crouch. She is survived by her husband, Michael â€œDickâ€�, sister, June â€œIreneâ€� Burandt; sons, Michael Jr., Steven (Mavis), and Scott; granddaughters, Jenifer & Elle Groves; and her little dog Lilly, whom, like the rest of us, will be lost without her. At Leslieâ€™s request, there will be no formal viewing or services. In lieu of flowers, donations may be made to the charity of your choice or Northstar Sportsmanâ€™s Club, PO Box 212, Hilton, NY 14468.